Blazoning: "Silver, to the red cross, accompanied in the canton franc by a natural Saint George, mounted on a white horse, slaying a green dragon". 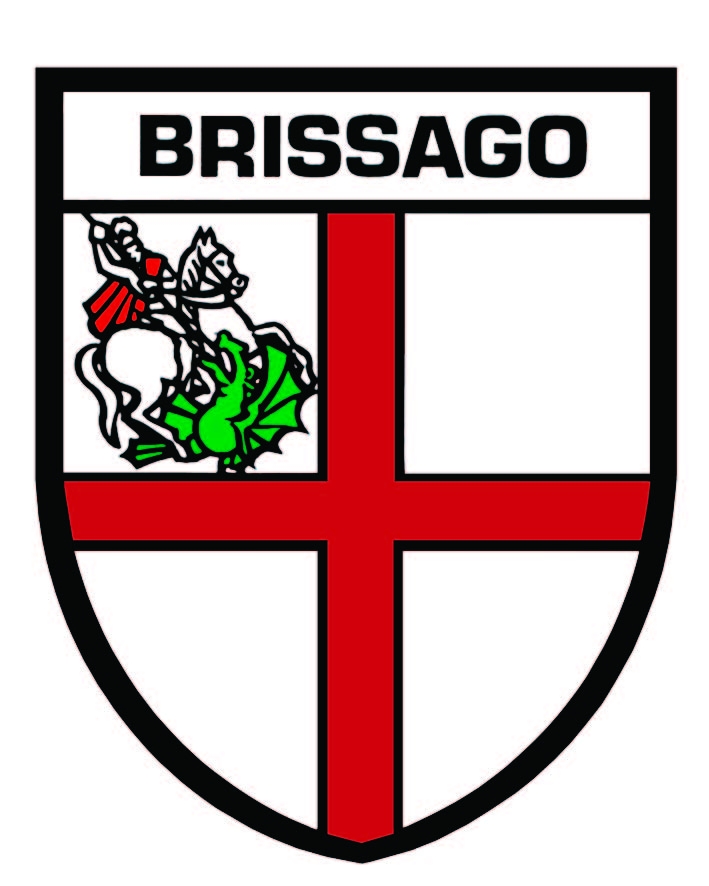 Brissago belongs to the ranks of those municipalities that can boast a history all of their own. The vicissitudes of the village on the right bank of the Verbano in many ways constitute a case in itself, a unicum in local historiography.

Two of the most significant chapters of this history are sewn on the banner that the municipality adopted in 1903 on the occasion of the first centenary of the autonomy of Canton Ticino.

The first is symbolised by a large red cross: this is the insignia of the Municipality of Milan, to whose dominion Brissago was subjected in the Middle Ages. In fact, from the mid 14th century, the Visconti included the Locarno area in their sphere of influence.

At the beginning of the 16th century, the Swiss, called to Italy by the Franco-Spanish wars, conquered Locarno and occupied the village on Lake Maggiore.

While the Locarnese bailiwick was definitively recognised by the Swiss in 1516, years of uncertainty followed for the Brissago republic. The doubts were dispelled on St George's Day (24 April) in 1521, when Brissago decided to place itself under the protection of the twelve Swiss cantons. This act of voluntary dedication marked the historical destiny of the community: with good reason, therefore, the municipal coat of arms displays the figure of St George, recalling the day Brissago left the Milanese orbit and entered the Swiss one for good.

As early as 1000 BC, we find in Brissago the first human intervention in the terracing of the territory. Among the populations that inhabited this region in ancient times were the Ligurians and Celts, who had human settlements of a certain importance. With the Romans, there was a change in civilisation and the introduction of cultures (vines, chestnuts, walnuts, ...) that later profoundly determined the country's economy.

In the early Middle Ages, forms of government were created along the lines of those in neighbouring Padania, modelled on those of the Italian Communes.

With the feudal age and the rustic commune, Brissago gave itself its first legal (rustic statutes) and religious structures (separation from the Pieve di Cannobio). Ownership and exploitation of the land (vicinia) were collective, respectively the appointment of political leaders (the podestà, the consoli, the credenza) took place by appointment from below. Although there were strong links with the Ambrosian parish of Cannobio, legal and institutional autonomy was guaranteed by the statutes.

The emergence of an early local bourgeoisie gave a strong boost to trade, manufacturing, art and culture. This rapid development of the village's economic activities did not lack new outlets in the direction of the Milanese markets.

In the 16th century, with the collapse of the Sforza family and as a consequence of the Italian wars, two rival factions were created in Brissago: the Milanese and Swiss parties.

With the power vacuum left by the decaying Duchy of Milan, Brissago was given the opportunity to establish a republican order (1515-1521). Unfortunately, bitter infighting, artfully fomented by those who wanted to subjugate the Brissago community, led to serious destruction and numerous deaths.

To put an end to this situation of grave hardship, on St George's Day in the year 1521, the people of Brissago swore allegiance to the Swiss, who in turn recognised the legal value of the village statutes.

In the 17th century, Brissago, reduced to the bare minimum, was separate land to the bailiwick of Locarno. Evidently, for political and economic reasons, the conflict with the municipality of Locarno began to make itself felt. The administration of the Swiss was also often not the happiest, creating quarrels and clashes with the regional pole. In this context, a few families of notaries were established whose administrative commitment kept the libertarian traditions of the Brissago community alive.

With the 18th century, trade took on a new development and at the end of the century, the ideas of the French Revolution did not fail to inflame the spirits of our citizens. However, in a public assembly, the people of Brissago democratically decided to remain with the Swiss.

The 19th century, with industrial capitalism and the first developments in the tourist industry, opened up new horizons. After the birth and upheavals of the Helvetic Republic, Ticino (1803) also took on its modern structure as a canton.

With the birth of the confederate state, political parties gradually began to establish themselves.

It was also the time of great emigrations to new continents, caused by the difficult economic situation. In terms of foreign policy, the wars of the Italian Risorgimento aroused not only great sympathy (Carbonari and Mazziniani), but also direct support from the people of Brissago for the Garibaldini.

The end of the century also saw the founding of the Tobacco Factory, the village's driving industry, a tangible sign of the emerging industrial era.

The 20th century saw the rise of the hotel industry with the construction of the Grand Hotel (1907), the Albergo Brenscino (1913), etc., signifying the considerable tourist attraction of the area.

On the back of this positive drive, a cultural life developed that found one of its peaks in people like Ma Ruggero Leoncavallo (honorary citizen in 1904).

From the Islands to the Alps: the Brissago region presents itself

From an environmental point of view, the region comprising the municipality of Brissago presents unique attractions, which we would venture to describe as almost opposites.

In fact, for lake lovers there is enough to satisfy even the most particular needs. Apart from the magnificent botanical park on the Brissago Islands, there are in fact bathing facilities, sailing and surfing schools, and ample possibilities for walks on the lake by public and private transport.

For those, on the other hand, who love contact with nature and are at ease in typically alpine areas, there is the possibility of long walks, favoured by a series of paths that run through the municipal district and climb up to mte Ghiridone, which dominates the lake at 2190 metres, or up to Capanna al Legn. Last but not least, there is also an artistic and cultural interest consisting of various historical monuments and architectural works that are known throughout Switzerland for their specificity.

How can one fail to mention the Renaissance churches of Sts Peter and Paul and Madonna di Ponte.

Other contemporary artists and architects have also left their mark on our region: architect. Livio Vacchini in the restoration of Casa Baccalà and arch. Luigi Snozzi, who gave new splendour to Casa Bianchini, owned by the parish.

The Brissago Islands: a plunge into nature with a pinch of love for botany

The Brissago Islands are certainly a unique attraction in the upper Verbano basin. The botanical park consists of various exotic plants of subtropical origin, cultivated in the open air.

The guided tour, with the presence of specialists in the branch, allows visitors to fully enjoy the riches that nature has managed to concentrate in this strip of land. For the romantics, the spirit of Baroness Saint-Lèger, an emerging personality of the great noble figures, who made the islands their home.

Today, the recently restored building is not only home to a pleasant public house, but also offers the possibility of organising congresses, conferences and assemblies.

During the summer, a major attraction is clearly the lake and the activities associated with it. In the region we find prominent bathing facilities, including the municipal lido in Brissago, near the Madonna di Ponte Church. Evidently, a sailing school (Yacht Club) and a surfing school (Marenca Surf) offer nautical enthusiasts ample opportunity for their favourite sport. Those who enjoy scenic boat trips are spoilt for choice and can easily leave the Swiss basin for the Borromean Islands.

On the cultural front: discoveries and testimonies

On the cultural side, too, the visitor's interest is certainly stimulated. Among the religious buildings bearing witness to the profound faith of the Ticino people, we find the Parish Church of SS Peter and Paul and the Church of Madonna di Ponte, works by architects Pietro and Giovanni Beretta. These are, as already mentioned, monuments in Renaissance style, built with the hard local stone. Also worth noting is the Sacro Monte with its Via Crucis chapels and the respective Church of Our Lady of Sorrows, fine works of the 18th century. Among the valuable secular buildings, the attentive visitor can admire the Casa Branca-Baccalà, a patrician house that stands in the historic core of Brissago, illustrating the opulence of this village in the 17th century.

To conclude this small list of works of interest, we would like to point out a peculiarity of what we could nowadays call industrial archaeology, ante litteram. It is a recently restored 19th century aqueduct, "i Canalitt", which winds its way through the living rock near the mti of Brissago, in the locality of Cortaccio.

For some time now, a great effort has been made to improve the footpaths that connect the various localities and, above all, to make easier those that lead from the mountain area to the peaks, which are reflected in the lake. A complete network of paths (clearly indicated on a map, designed specifically for tourists) winds its way through delightful forests, touching places surrounded by greenery.

In the upper area, one reaches the Corona dei Pinci, Pizzo Leone and Ghiridone, with magnificent views of the lake and the lakeside villages.

Among the realisations of recent years is the Capanna Alpina, in the al Legn locality, which allows hikers and mountain lovers to organise unforgettable trips and stays in a unique alpine setting. The alpine pastures of yesteryear (Naccio, Alpe Casone, Mergugno, Arolgia, Cortaccio, etc.) remain as vestiges of a rural past that is now only present in the memories of the elderly. Here too, a miracle of nature, stands the Sacred Wood, which, with the blossoming of the cytisus, dyes a large wooded area above Mergugno in yellow.

Discover now the 14 hamlets that make up beautiful Brissago.